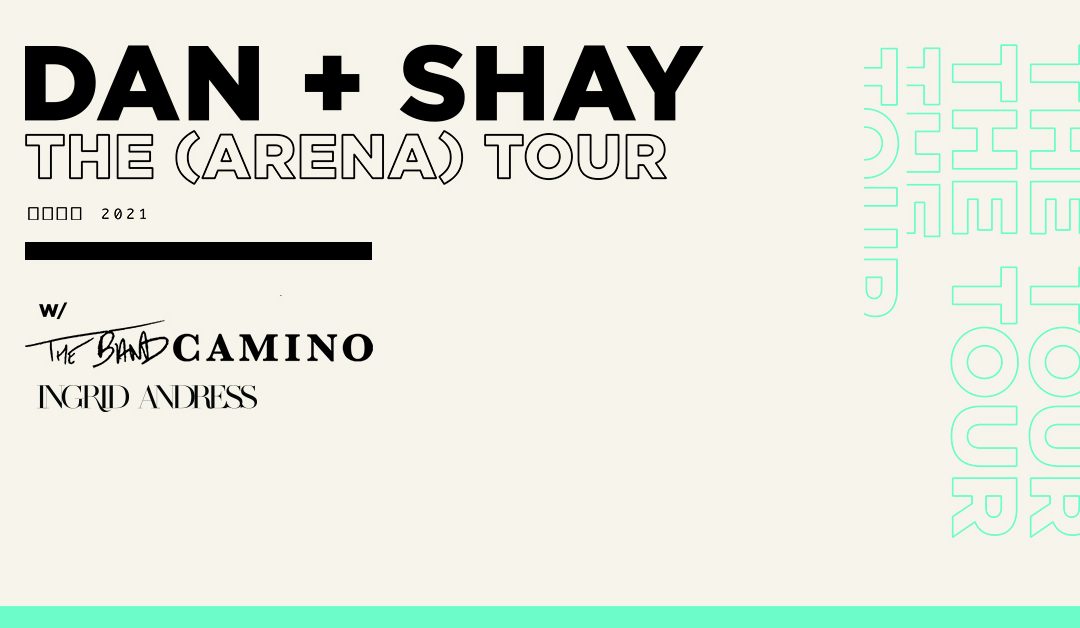 This concert has been rescheduled to November 12, 2021. Your original tickets will be honored at this new date.

GRAMMY-AWARD WINNING DUO TO HEADLINE THEIR FIRST EVER ARENA TOUR ACROSS 35+ U.S. CITIES

(October 7, 2019) – Solidifying their superstar status with yet another career milestone, GRAMMY-winning duo Dan + Shay have announced dates for their first ever headlining arena trek, Dan + Shay The (Arena) Tour. The 35+ date tour, presented by AEG Presents, will kick off March 6, 2020 at Bridgestone Arena in Nashville, TN and conclude October 31, 2020 at Tacoma Dome in Tacoma, WA. The tour will also include a stop at New York City’s famed Madison Square Garden.

American Express® Card Members can purchase tickets before the general public beginning today, October 7 at 12 p.m. ET through Thursday, October 10 at 10 p.m. local. Tickets go on sale to the general public starting this Friday, October 11 at 10 a.m. local time. A limited number of VIP Packages will be available to purchase. These exclusive offers include an incredible selection of tickets and limited-edition merchandise created exclusively for VIPs. For complete presale details and ticket information, please visit https://www.danandshay.com. A complete list of tour dates can be found below.

Dan + Shay shared the touring announcement just days after unveiling a brand new collaboration with one of the world’s best-selling pop icons, Justin Bieber, as their latest single “10,000 Hours” (LISTEN HERE). The duo’s Dan Smyers and Shay Mooney co-wrote the song with Bieber alongside Jessie Jo Dillon, Jordan Reynolds and Jason “Poo Bear” Boyd. The undeniably catchy track was also produced by Smyers and promises a lifetime of learning and loving as his and Mooney’s flawless harmonies trade verses with Bieber’s smooth vocal. Watch the song’s music video HERE.

In its first 48 hours of availability, “10,000 Hours” has already tallied more than 30 million streams globally. Ranked at #5 on Spotify’s Top 200 Global Chart and #2 on their Top 200 US Chart, it also appears in 45 charts globally, arriving at #1 on China’s Netease Chart and #2 on China’s QQ Music Chart. The track is #3 on Apple Music’s Top 100: Global chart and has kept the #1 spot on the iTunes Top Songs chart since it was released, with the official music video reaching #3 on YouTube’s Trending chart, which includes all videos on YouTube.

Fans can expect to hear the duo’s growing catalog of hits from their most recent album Dan + Shay, which has held strong in the Top 5 on Billboard’s Top Country Albums chart all year, earning over two billion on-demand streams globally to date. The record-breaking project produced three back-to-back chart-topping singles – the 3x Platinum multi-week No. 1 “Tequila,” 2x Platinum four-week No. 1 “Speechless” and most recently, the Gold-certified “All To Myself.”

In addition to a string of No. 1 hits, the album rewarded the duo with their first-ever GRAMMY award for Best Country Duo/Group Performance (“Tequila”), with their performance on the live broadcast becoming the most Shazamed song of the night. They were the-most awarded artist at this year’s ACM Awards, taking home three awards for Best Duo, Song and Single (“Tequila”), with Smyers earning an additional two for his work as a songwriter and producer. Dan + Shay also added a Billboard Music award for Top Country Duo/Group to their shelves, most recently taking home two surfboards at the Teen Choice Awards for Choice Country Artist and Choice Country Song (“Speechless”) after sweeping the country categories. Among the most-nominated artists at this year’s CMA Awards, Dan + Shay are up for Duo, Album and Single of the Year for “Speechless,” with Smyers receiving an additional nomination for Song of the Year as a co-writer alongside Nicolle Galyon and Jordan Reynolds on “Tequila” for the second year. Earlier this year, CMT awarded them the Duo Video of the Year trophy for “Speechless” and recently announced their inclusion as one of the top country superstars of 2019 to be celebrated at their 10th Annual “CMT Artists of the Year” special, airing Wednesday, October 16 at 8pm ET/PT.

Dan + Shay The (Arena) Tour follows their sold-out Dan + Shay The Tour earlier this year. The duo just wrapped their time on Florida Georgia Line’s Can’t Say I Ain’t Country Tour and will join superstar Shawn Mendes later this month on his self-titled tour in Australia.

ABOUT DAN + SHAY
Dan + Shay continue their rapid rise and are taking the music world by storm. The last twelve months have seen GRAMMY, Billboard, ACM, CMT, and Teen Choice Award wins – most recently snagging several CMA Awards nominations, the accumulation of over two billion on-demand career streams, several mega-hit, chart-topping songs, and more. The pair have already sold out headlining US & UK tours in 2019, where they performed from their ever-expanding array of hits, including their most recent chart-topper, “All To Myself,” their 2x-Platinum, multi-week No. 1 single “Speechless”, and the most-streamed song released in 2018, multi-Platinum, multi-week No.1 global smash, “Tequila.” All three are featured on Dan + Shay, which has sold more than one million album equivalents and debuted at No. 1 on Billboard’s Top Country Albums chart the same week “Tequila” reached No.1 on the Country Airplay chart, marking the first time since 2009 that a duo or group has topped both charts simultaneously. Dan + Shay made SoundScan recorded history as the first new country duo to debut at No. 1 on Billboard’s Country Albums Chart with their Gold-certified first album, Where It All Began. Their catalogue comprises three albums, including Where It All Began, Obsessed, and Dan + Shay, six Platinum singles, including the duo’s debut “19 You + Me,” and their six No. 1 hits: “Tequila,” “Speechless,” “All To Myself,” “Nothin’ Like You,” “From The Ground Up” and “How Not To.”

About AEG Presents
Combining the power of the live event with a focus on true artist development, AEG Presents is a world leader in the music and entertainment industries. Operating across three continents, the company has an unparalleled commitment to artistry, creativity, and community. Its tentpole festivals and multi-day music events — which include the iconic Coachella Valley Music & Arts Festival and the legendary New Orleans Jazz & Heritage Festival alongside British Summer Time at Hyde Park, Stagecoach, Hangout Festival, Electric Forest, and Firefly — continue to set the gold standard for the live music experience. AEG Presents promotes global tours for artists such as The Rolling Stones, Ed Sheeran, Elton John, Taylor Swift, Celine Dion, Justin Bieber, BTS, Kenny Chesney, Paul McCartney, Katy Perry, Panic! At The Disco, Luke Combs, Maggie Rogers, and Dan + Shay, and in addition to — through its network of clubs, theatres, arenas, stadiums and renowned partner brands such as Goldenvoice, Messina Touring Group, Concerts West, The Bowery Presents, PromoWest Productions, Marshall Arts, Madison House Presents, and Zero Mile Presents — creating and developing an infrastructure for artist development and audience reach that is unmatched by any company in the world. AEG Presents is a wholly-owned subsidiary of AEG. More information can be found at www.aegpresents.com.